Established in the early 1920’s, Kinston Country Club is a Kinston landmark.

Walter Bickett, who supervised the planning of the Norfolk V.A. Country Club, the Princess Anne Club at Virginia Beach, the municipal golf links at Norfolk, and the Portsmouth 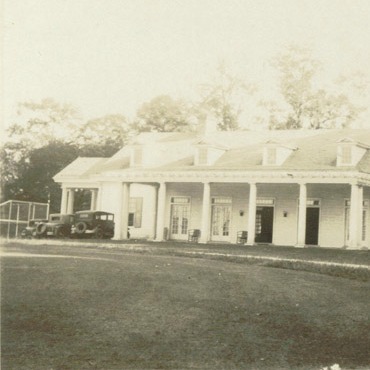 Country Club, declared the site of the local club to be ideal –one of the best in the south. “Monthly dues were fixed at $3.00 plus war tax including privileges for the active member and for his immediate family.” Membership stock shares were $200, and originally membership was limited to 200 families. During a board meeting in December of 1923, R. Allie Whitaker, Board President, reported that the deed conveying the George Suggs property opposite the Fair Ground had been completed and ready for delivery.

C. Felix Harvey said his grandfather and the others primarily wanted a place in the “country” where they could have a permanent picnic area for eating and fraternizing and not to play golf at first. The first nine-hole golf course was originally at Hillcrest and around 1931, a qualified nine-hole course was set up and additional property was obtained from Ely Perry.

The original clubhouse was built from handpicked lumber from Lovitt Hines’ lumberyard. The entrance is the same as it was but the dining room was where the office is today. There was not a kitchen because full meals were not served then. Behind the Ballroom was a long porch with steps descending on each side to the pool area. The space underneath was for men’s and ladies dressing rooms. The golfers built the pro shop.

The Depression caused hard times so it was a struggle to keep the club going. The loyal members had to dig into their own pockets to pay bills. By 1948 the situation was very desperate so Leo Harvey had plans to develop the rest of the property into building lots and the club itself needed improvements. Meanwhile other members such as, L.B. Jenkins would give his first share of the property if Ms. Whitfield could get 200 members at $200 each to finance the restructuring of the club and to build an 18-hole golf course. They succeeded their goal and on November 26, 1948 the owners of all the stock, totaling 179 shares, and properties were deeded to the Kinston Country Club properties, Inc. Recently an attempt to raze the historic Country Club and build a $3.2 million site met opposition by a majority vote of the 600 members. The club today continues to enjoy an active and caring membership, and strive to provide the best in food and family oriented activities.